Today on my blog I have an extract from Belfast Central by A. K. Amherst.

Belfast 1993: A nocturnal ambulance service at the Belfast Central Station almost turns deadly for the young paramedic Ryan. In the crosshairs of the IRA, he is badly wounded and wakes up in the hospital with muddled memories. The police close the case fast, leaving too many burning questions unanswered. Most importantly, who was that old man who appeared at the scene out of nowhere and saved Ryan’s life? Not fully recovered yet, Ryan begins searching for the mysterious man, only to get dragged into a feud between opposing paramilitaries – with fatal consequences…

A thrilling story about fates in 20th century Northern Ireland.

Born and raised in Austria, A.K. Amherst travelled the world from a young age. This influenced her writing, which relates to history and cultures of foreign countries. Intensive research is part of her job, and she really loves her job. You want to be taken into another setting and experience life from a different angle? Then Amherst is the writer for you.

There is a more detailed author bio on my website if you need it longer, but I prefer to keep it short 😉 Link to author bio “longer version”:

Finlay’s shop was in a stretched, rectangular room. There was hardly enough space for a person to walk through the narrow aisles between the shelves. Amid all the groceries, Adam discovered the shelf of candy bars. Adam licked his lips. How yummy they must be.
‘Take one.’ Finlay stood behind the counter, transferring the cash from his till into the safe. He didn’t have to say that twice.
The chocolate melted in Adam’s mouth. Sweet caramel stuck his tongue to the palate. ‘You wanted to see me, sir?’ Adam smacked.
‘Indeed. We have a meeting now, and I need you to take notes for me.’
Take notes? A meeting? The sun set hours ago and the shop was closed. What weird meeting was that?
‘You can write, right?’ A silly question.
‘I asked you something,’ Finlay said.
Adam nodded.
‘Don’t look so dense. Come with me.’
Adam followed Finlay into the back of the store, through an office and a long, narrow aisle. At the end was a door. Finlay put his hand on the doorknob and looked at Adam sternly. ‘Just to make it clear, you don’t tell anybody about this. Do you understand? No one.’
‘OK.’
The room was large, the walls grey. No windows. Bright, artificial light. There were about half a dozen men gathered. The table they were sitting at was big enough for half a dozen more. Finlay sat down at the front end and pointed Adam to sit beside him. Paper and pen were ready.
The murmur of the men fell silent as Finlay raised his voice. ‘I know you are upset, but I ask for order during the meeting.’
‘Who’s the boy?’ the man with a full beard, sitting next to Adam, asked. 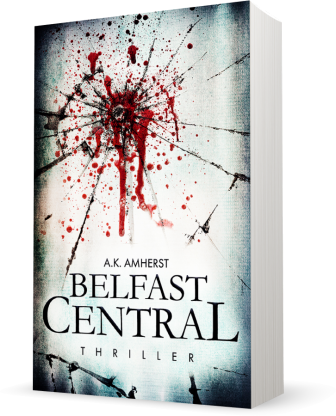 ‘He’s keeping minutes today,’ Finlay said.
‘Can we trust him?’ The question was asked by a man Adam wouldn’t have trusted one bit. The man had his cap pulled deep into his face. The jack-knife in his hands clicked as the blade snapped. In. Out. In.
‘He works for me,’ Finlay said.
Finlay’s icy gaze paralysed Adam. Suddenly, the candy bar left a bad taste in Adam’s mouth.
‘Why are we even meeting up if half of us can’t make it tonight?’ yelled someone from the other end of the table.
‘Good question,’ Finlay said. ‘I’m afraid the others won’t be able to make it for quite some time.’
The man sitting opposite to Adam hit his fist on the table. ‘Damn police. They’re only working for the Protestants in this city.’
Police? Adam didn’t understand a word.
Finlay raised his hand soothingly. ‘Unfortunately, not only our allies fell into the hands of the police, but also many of our records.’
‘What? How could that happen?’ the man with the full beard growled.
‘They caught O’Connor and found the minutes of our last meetings in his apartment?’ Upset muttering set in.
‘No reason for a kerfuffle!’ Finlay shouted.
‘No reason? We could all go to jail!’ one man said.
‘Don’t be silly. If you haven’t been arrested yet, you won’t be,’ said another.
‘Yes, at least for now,’ a third one yelled.
The laughter of the men sounded like rolling thunder to Adam.
Finlay’s sharp whistle made Adam wince. ‘We need a plan, a counterstrike!’
‘What’s the name of this guy who recently snooped around here? Constable something?’ the shady bloke with the jack-knife asked.
‘Constable Fraser!’ someone shouted.
‘Like I said. A British name, for sure a Protestant,’ another one said.
‘We need to take care of him, this Fraser. We should get rid of him,’ said the man with the full beard.
Everyone nodded in agreement.
‘Then it’s settled. Halligan. Your mission,’ Finlay said to the shady bloke with the jack-knife.
He nodded.
Finlay turned to Adam. ‘Did you write everything down?’
Adam stared at the empty piece of paper in front of him. ‘Um…’

Please do go and check out all the other blogs that are contributing to this blog tour, they are al listed below. 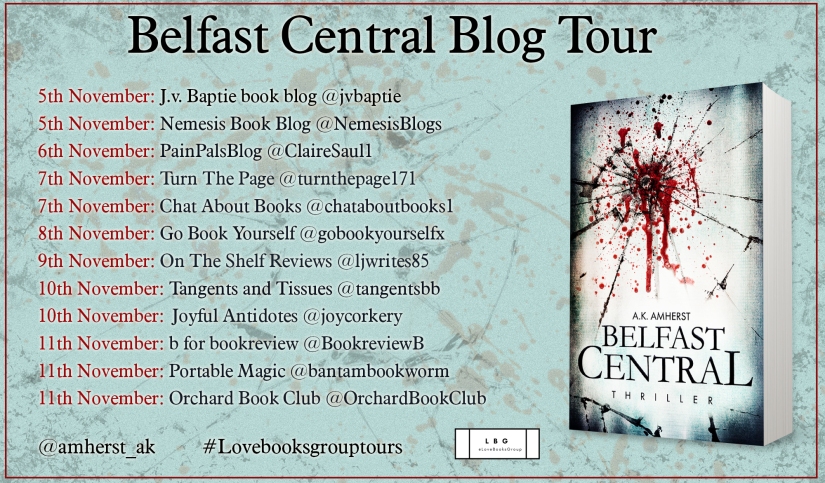